The Destructive Power of White Privilege

Today many Americans move around a lot, and we also travel more than ever for work and for pleasure. More and more of us are finding ourselves in contexts where we spend time with people who experience life differently from us. Here at home, this interaction can reveal to us that not everyone enjoys the same level of freedom, security, opportunity, and welcome in the United States.

My ministry has taken me into two different regions of the United States, from the Midwest to the Bible Belt. I have lived in predominantly white communities and I have lived in a majority African- American community. I now live in the most ethnically diverse county in the Southeastern United States. My travels have taken me to Eastern Europe, and to Africa.

Because of this journey, I have been exposed to many different people and communities and met so many great believers. And along the way, I have slowly begun to learn from my brothers and sisters in Christ and to see things that society didn’t want me to see. I love reading, so I’ve tried to read any books that friends recommend to me, which has been a journey into some new understandings as well, not always easy ones.

I have come, slowly, to accept that I have been privileged in so many ways. When people look at me, they see white and they see male. They also see bald and pudgy. By all accounts, this perception provides me with social privilege (not the bald and pudgy part). Even if the privilege is sometimes small, that small amount adds up with compound interest over time. White privilege is real, it was intentionally built into the fabric of our nation, and it affects us all. It was a part of our Constitution, it justified the horrors of slavery and Jim Crow and more. Intentional efforts to sew racist ideology into the fabric of our nation were so highly successful that we remain blind to much of this thinking and behavior to this day. The privileges of being perceived as white are so familiar, that we have a hard time even noticing it if we benefit from it. And there remains massive, intentional, ignorant, or unselfconscious resistance to eradicating it.

When I open my heart, my ears, and my eyes to my brothers and sisters of color, this is the hard truth that they have shared with me. I do not have to see it for it to be real, but seeing some of it has shocked and saddened me.

What is White Privilege? I am no expert, but I have found a short article by Pastor John Pavlovitz to be quite insightful. { https://relevantmagazine.com/culture/5-truths-about-white-privilege/}.

If you are white, you privileged whether you believe it or not. The way the world sees you has made a difference since the day you showed up on the planet. Your pigmentation has come with certain advantages and exempted you from specific obstacles and there’s simply no way around it. If you are a white person living in America or a vast majority of other parts of the world, you have had the luxury of feeling as though your skin tone is somehow the default, the baseline; that you are the standard against which others are measured and referenced.

But white privilege also destroys me.

It is built to keep me blind, ignorant, hard of heart, and feeling superior. Yet blindness is not an asset. Ignorance is not a virtue. Hardness of heart is not a pathway to relationship. A superiority complex does not lead to humility. A sense of privilege does not lead me to repentance. White privilege also destroys my life. As James Baldwin wrote in The Fire This Time, “Whoever debases others is debasing himself.”

Jesus, who experienced little privilege on this earth, said, “the last shall be first.” He did not glorify poverty or ignore the social injustices around him because “poor people come first in heaven” or “the lowest people are the most spiritual.” Instead, Jesus called us to reach out to all people, to raise people up. But as we do so, he called us to be “poor in spirit” at the same time and to humble ourselves.

He knew we would not be able to humble ourselves enough to change. We humans are fallen creatures and we cannot save our world. Our system is corrupt from within, so he came into our system from another Kingdom, and redeemed the world. He gave up his heavenly privilege and he allowed himself to be taken, falsely accused and condemned, and crucified. But, thank God, he also rose again. And this Gospel of his Kingdom continues to turn the world upside down in every way.

His kingdom is not based on privilege because privilege kills. Privilege is not the goal, it is the disease! There are many forms that this sin takes, but white privilege is one dominant way it expresses itself today.

When I am feeling privileged, or accepting privilege, I am not seeking humility. When ignoring the cries of others, I am hardening my heart. When refusing to listen to my brothers and sisters who are less privileged, I am living in ignorance. When I feel I deserve more than other people, I am not growing into real relationships with people. When allowing prejudice or hatred in my heart, I am dying inside. 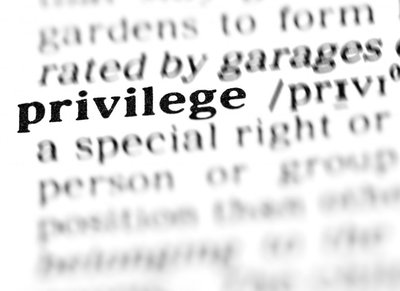 A prominent group of Evangelical pastors and leaders, led by Pastor John MacArthur, recently issued a statement on Social Justice which denied the reality of white privilege and structural racism. The statement they issued, sadly, lacks significant input from people of color. It represents an attempt to avoid a hard truth about our society. This avoidance prevents us from repenting and working together to heal and change. It leaves white privilege intact by denying its existence, and giving it cover.

I cannot sign such a statement, because when I am pretending that privilege does not exist in the very structures of our society, I am refusing to walk in the truth, and denying the voices of my fellow believers. And doing that will ultimately lead me more and more toward a divided heart.

I have to go beyond private, individual change because Jesus said “do unto others as you would have them do to you.” The Golden Rule is an active rule. So I must go out and help remove any barriers that others face, because that’s what I would want others to do for me. I can lay aside my privilege and follow the lead of those who have experienced the disadvantaged life.

My sense of privilege is always striving to keep its place. Rev. Dr. Martin Luther King, Jr. said that there is always a backlash. Privilege is based on fear, fear of losing power and control. I have felt that fear, the fear of losing power and control. The feeling of loss of some “ideal” world. I have felt that backlash rising up in my own heart. But as a Child of God and a follower of Jesus, I need his perfect love to cast out that fear. Fear only leads to division and not reconciliation.

Our situation is never hopeless, because Christ brings hope. He said that if we lose ourselves, we will find ourselves. In other words, when we give up the false sense of privilege and superiority, and when we work it out of our organizations, churches, and families, we will feel like we are losing ourselves. But in the end, we will be finding our true life in him, the Lord of the One Body of Christ and the Savior of the world.

I am asking God to open my eyes to see, so that I am no longer blind. I am asking him for empathy and understanding. Because I believe that we, the Church, can surrender our notions of power and privilege and elevate all believers to their place in Christ as one. The Church can lead the way for society and we can turn the world upside down once again in the name of Jesus Christ.

Rev. Canon Greg Goebel is a priest who lives in Atlanta, GA.